The Role of Integrated Photonics for Future 5G Networks

Data usage and, thus, data traffic over the mobile and fibre networks is growing exponentially every year. While the currently used optical transmission solutions are reaching their limits, a new technology is ready to be implemented.

Traditional photonics use manipulation of light to generate, detect, or process information. More recently, integrated photonics has shown the advantage of squeezing complex functions into a single chip.  This yields a more energy-efficient and low-cost solution.

Here, Giuseppe Coppola and Jorn Smeets from PhotonDelta, and Ruben Fokkema from Brainport Development, discuss integrated photonics, the landscape and the challenges that the world faces in the upcoming years. They also explain the potential of integrated photonics and what their organisations are doing speed up the development of this technology. Boudewijn Doctor, Joost Verberk and Michiel Boermans from EFFECT Photonics discuss the advantages of using their SFP module platform with tuneable transceivers in the 5G network. Field trials are being executed in the VodafoneZiggo network and in the 5G Hub to show the performance of their transceivers. But it is not only about the results now, it is about what their technology is able to do in the future.

Integrated photonics as a key technology

Integrated Photonics is one of the key technologies from the Brainport region and it can be the next big thing. Ruben says: “I truly believe that it is worthwhile to invest in all kinds of ways in this next generation chip industry. We have to bring everything to the game to make it happen as integrated photonics is one of the most promising industries in development”. According to Giuseppe, Europe should cooperate on this: “The Netherlands, in particular the Brainport area, can aspire to be the integrated photonics valley of the world. Still joining forces with the rest of Europe is needed to ensure that the industry has enough scope to stay competitive”.

PhotonDelta drives the creation and acceleration of the growth of Dutch-based companies and technology institutes active in the integrated photonics industry. A national strategic plan is being drawn up to build the industry for integrated photonics. Jorn mentions: “Where does the Netherlands see itself in twenty/thirty years? We must act now to get there. We already have the three universities that publish the highest number of articles on photonics. We need to transform that to a production industry.” Brainport Development supports PhotonDelta by identifying and prioritizing the most promising companies to work together on their ecosystem. As Ruben mentions, the Brainport region contains a lot of knowledge, but the focus needs to be on creating an industry in a holistic manner.

From designing to developing and the actual manufacturing, when someone says, “integrated photonics,” people should think immediately about the Brainport region. But what is integrated photonics? And what is the potential for the use of it?

Integrated photonics enables photonic circuits to process and transmit light, just as electronic signals are processed and transmitted by electronic integrated circuits. Photons (light particles) move at the speed of light without interference. This means that information can move faster and more efficiently while using less power.

So, why is photonics not used on a large scale already? According to Giuseppe, the two biggest challenges are creating a solid base of the supply chain and connecting it to the market. The supply chain needs to mature, and opportunities need to become more concrete. Jorn adds that the expected energy savings of using integrated photonics in datacentres is already making big global tech companies look into the technology. However, photonics does not only add value from a savings point of view. It has a lot to offer for for instance 5G.

Giuseppe mentions that the added value for 5G can be classified into three categories. The first one belongs to the backbone of the 5G network: by using photonics, one can send more data with lower latency and with higher capacity. This is the solution that EFFECT Photonics is working on. EFFECT Photonics delivers tuneable optical transceivers that connect both ends of the fibre in a mobile fronthaul DWDM (Dense Wavelength Division Multiplexing) network. The DWDM technology multiplexes several optical signals onto a single optical fibre by using different wavelengths of laser light, hence increasing the capacity of the network. “EFFECT Photonics is different from other transceiver companies because we are able to put all optical elements into one chip. It makes the assembly easier because you just need to design the chip, make it, and connect it to the fibre,” Joost mentions. This System-on-Chip (SoC) technology provides cost-effective modules with a complete solution on one chip.

At the same time, a bit further out in the future, photonics could enable free space communications by sending light out in the air. It is like an invisible fibre. One important aspect that should be considered, though, is the safety for the human eye. However, developments in this aspect are going fast. Imagine Li-Fi (wireless internet connection based on light) where you can direct beam to your laptop so that you can use all the bandwidth available. Light does not only create links, but the beam can also be moved around. That brings us to the third category.

An optical phased array is where the direction of light beams can be steered by dynamically controlling the optical properties of a surface. These beams can follow specific clients that need very fast access with the ability to dedicate the bandwidth to whoever needs it the most: for example, critical services.

Additional advantages of photonics are that you can reach higher speed and process huge amounts of data while saving energy (and thus costs). As Giuseppe says: “If you can do it cleverly, you can have the physics working for you and be able to process data and compute faster. At the speed of light!”.

Currently, EFFECT Photonics and the 5G Hub are running the first public 5G trial of optical transceivers based on a fully integrated photonic chip in the Netherlands. The SFP transceivers from EFFECT Photonics are tuneable transceivers, which are different from the standard devices with fixed wavelength. As Michiel explains: “The tuneable devices can ‘detect’ different kinds of colours, so that you only need to have one transceiver on stock for multiple applications”. Although this seems very beneficial, there is also a downside, as Joost mentions, “You need to explain to the technician how the tuning of the device works, and connecting it right is very sensitive to errors.  That is why we have added a bit of extra intelligence to the transceiver where it scans the network and finds its own colour. That is exactly what we will test in the VodafoneZiggo network and at the 5G Hub. This means you have both the advantages from fixed as well as from tuneable.”

The current trials work with transceivers that have 9 channels and can reach a throughput of 10 Gbps. “Although the network speed does not improve significantly with the current trials, the basis of their technology platform is very suitable for expanding that performance curve”, as Joost explains. However, using photonic integration brings a cost advantage, and the field trials are a test for the future. It is not only about the current performance, but very important for the network of the future. With this platform technology you can build incredibly complex chips. As Boudewijn mentions: “The more you put together, the more revolutionary it becomes.”

Applying the transceiver in a 5G network is very interesting because there is a demand for extra capacity at the edge of the network. At no extra cost. Boudewijn states: “We are bringing the high-end technology that is used in the centre of the network, now at affordable costs to the edge, supporting the architecture and bringing the technology that is now used on the inside of the network, to the outside.” Their application is able to provide potentially unlimited data transmission capacity and bandwidth. Combine that with 5G that is designed to support a massive increase in traffic capacity and network efficiency, and you can imagine the potential benefits in the network. The DWDM technology allows for increased load on the fibre network. Which is beneficial not only right now, but also enables us to make better use of the optical fibre cables that are already underground, negating the need to replace them to improve our network. In addition, a shorter latency to the central point can be achieved and first signal processing can be done at location, which also enables time-critical applications. The application is not limited to the 5G network, but also FTTx or Remote PHY networks can be upgraded using DWDM.

EFFECT Photonics is a partner of the 5G Hub, which enables them to execute field trials. These field trials are a valuable addition to all the tests that EFFECT Photonics executes themselves, to see how it really works in the network but also to learn more about all the practicalities around the use of their application. From how the technicians work with it, to at which locations the transceivers are actually used. However, it is not only about these trials. Working together with the 5G Hub brings them in contact with the ecosystem around the Hub and its network. It opens a lot of doors for collaborations and together we can bring this ecosystem forward. As Boudewijn mentions: “We want to learn more about not only the 5G network, but also about the possible applications of 5G and how we can add value to these applications.”

Brainport Development and PhotonDelta are building an industry. When more progress is made, new applications are discovered on the way. And Jorn mentions that telecommunications seem ready for integrated photonics. With the ever-growing data flow, the need for always more and faster, integrated photonics can play a huge role in the future to fulfill our needs. EFFECT Photonics is one of the key players in shaping this future of photonics, applying their tuneable optical transceivers into the network already today. If you are interested in learning more, check out the website of EFFECT Photonics, PhotonDelta and Brainport Development.

Together with industry experts, PhotonDelta has completed a roadmap for the use of integrated photonics in the Data & Telecom industry. Download your copy below. 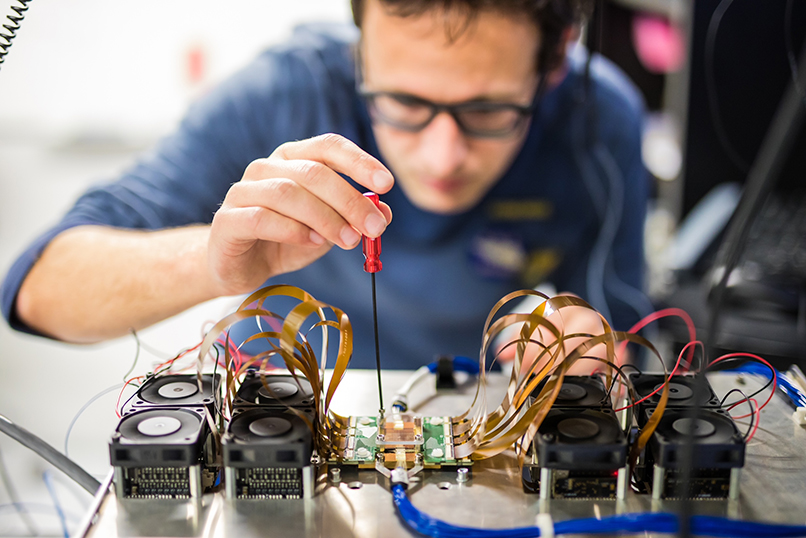 The Eindhoven-based start-up MantiSpectra has signed a framework agreement with Vestel group to validate and accelerate the use of spectral sensing technologies in the domain of Smart Home appliances.

Are We There Yet? How Optical Chips Are Setting The Pace On The Road To Automotive Innovation

There’s no doubt about it: in the not-too-distant future, cars are going to have a lot more technology packed into them. A heck of a lot more. Could optical chip technology – aka integrated photonics – be the answer to automotive manufacturers’ combined need for smaller and more energy efficient hardware?